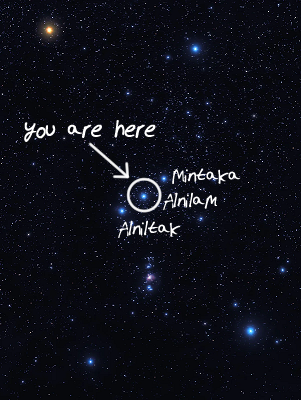 The planet of Alnilam orbits the star of Alnilam located in the constellation of Orion between Alnitak and Mintaka. Although science classifies the star as a large blue supergiant estimated to be 275,000 to 832,000 times as luminous as Earth's sun and 40 to 44 times as massive, those who live on the planet know their star is roughly the size and luminosity of Earth's and is golden yellow in color. Also orbiting the star is a moon, again, roughly the same size and shape as the moon of Earth which means Alnilam's gravity is Earthlike as well.

The atmosphere of Planet Alnilam is Earth-like (but cleaner as there is no air pollution) and is thus breathable to humans. The sky is lavender and darkens to a deep purple at night, the clouds are colored like Earth's (white unless there's a storm, then they're gray), all the vegetation is multicolored (the unicorns say that the different colors are different flavors), and the water is crystal clear with a silvery shimmer.

Alnilam is divided into several main zones that are seen/talked about all the time, and a few lesser zones that aren't mentioned much but are no less important.

~ The small meadow is where Lisa's house is located. The Doctor's TARDIS is also parked there and there is a portal to the Chaos Continuum that can only be
used by Lisa and the other unicorns.

~ The forest is where Woodhorn and Janis Thorn roam and where the Gateways to and from the planet will manifest.

~ The large meadow is where the Unicorns of Alnilam will be found most of the time.

~ The jungle is mostly surrounded by a force field and may or may not house the prehistoric Earth creatures once known as dinosaurs. Kamelion maintains the field.

~ The ocean is the domain of Atlantis the Mernicorn.