The small meadow is where Lisa's house is located as well as where the Doctor will park their TARDIS and now houses a portal to the Chaos Continuum that only Lisa and the unicorns can use. The unicorns don't spend much time there unless they want to get away from the crowd in the larger meadow where they mainly live.

Lisa's house is unique. It was built by the unicorns (with some help from the Doctor and their granddaughter, Susan) after the explosion that wiped her memories and, as a result, the house is kind of aware of what goes on within. For example, if someone wants tea there will be a mug, tea, and full kettle (or the Keurig, if that's easier for the individual) ready. It can't move around like Casita from Disney's Encanto, but it manages.

I've built the house in The Sims 4 to the best of my ability and screenshots and descriptions are provided below as well as the image I made of the Chaos Continuum portal.

The portal to the Chaos Continuum made by Slider. It sits on the opposite side of the house to the Doctor's TARDIS. I added the multicolored vegetation and the lavender sky for use on TikTok. The rest of the screenshots don't have that. 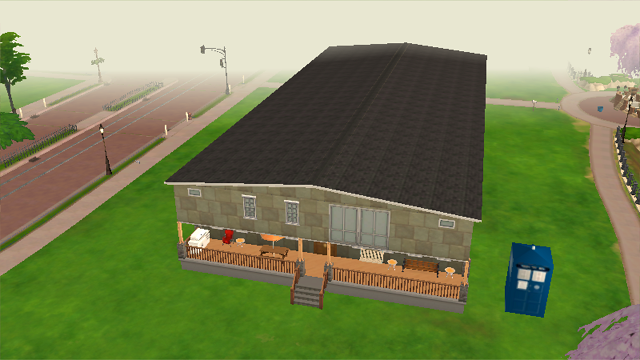 The front of the house. As the TARDIS is on the viewer's right, the aforementioned portal would be on the left. 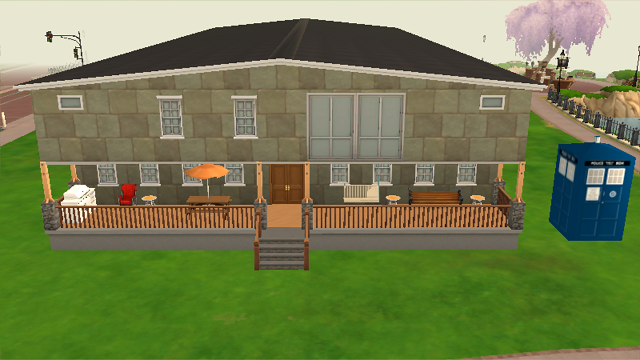 The front porch. Has a swing and other seating and a BBQ. The rest of the pictures were taken before I added the supports for the second floor. 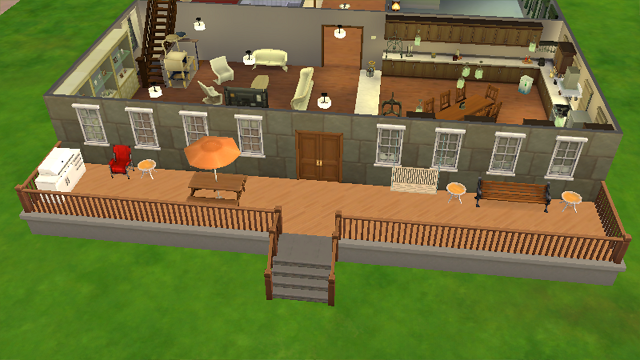 Here you see the front porch, the living room, and the eat-in kitchen. 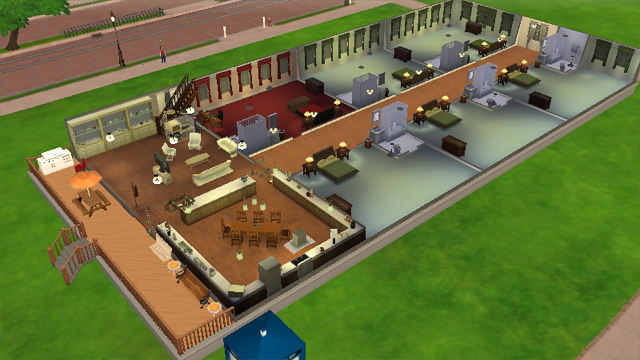 Main floor. Stairs to the other floors, living room, eat-in kitchen, and the Hall O'Rooms.

What is affectionately called the Hall O'Rooms, that houses all of the bedrooms for anyone when they stay on Alnilam. The Sims lots limit it to six rooms, but this can go on forever if, by whatever chance, all of Lisa's romantic partners just happen to be on the planet and need a place to stay. Or anyone who needs a room, really. 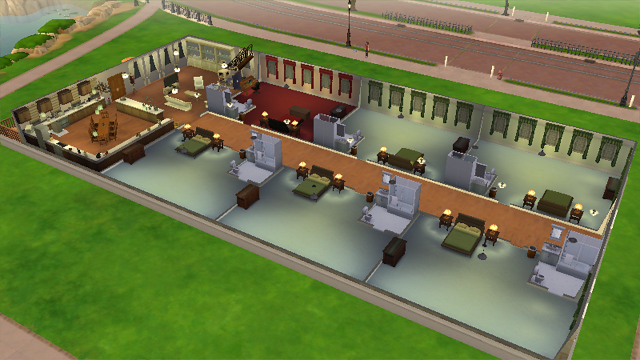 This is an older screenshot as Lisa's room is less red now. The rest of the rooms are empty, ready for whichever one of her romantic partners show up. Though the room starts at the soothing green colors, they will decorate that room however they want as it is theirs to keep forever. 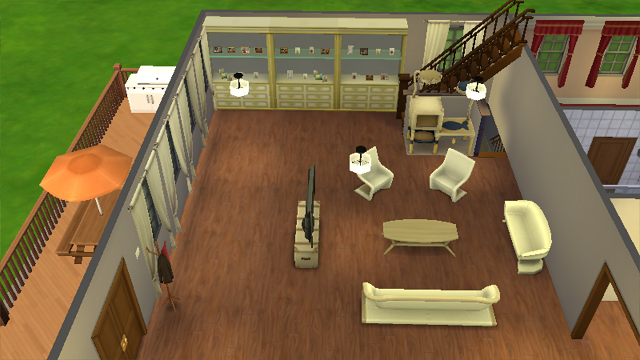 The living room. Those shelves by the stairs will hold photographs of AL and her friends and loved ones. The couch is one that has held many of them when they weren't strong enough to get to their room. Also, the cat condo thing for Lisa's cat, Fluffy. 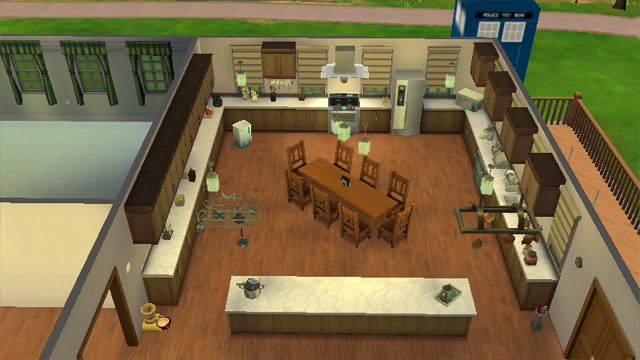 The eat-in kitchen. Good cabinets and storage. At least one of those holds a supply of Medicus' remedies, though sometimes he needs to make one specific to his patient.

Lisa's room. That thing by the bed is the closest I could find to a trunk.

Windows. If you look closely you'll see a little switch near the floor between the windows. That's the switch that opens the wall to let Medicus (or other unicorns) in. 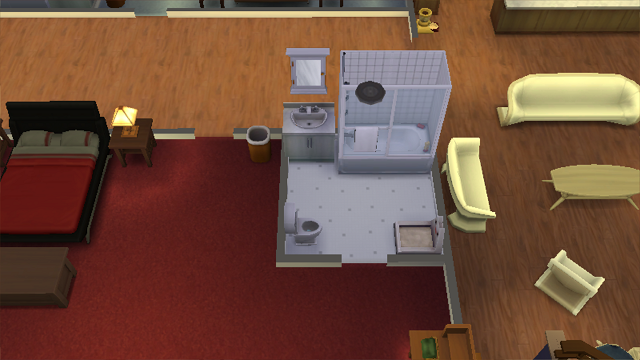 Old picture with the red carpet. The bathroom in Lisa's room. Has Fluffy's litter box. 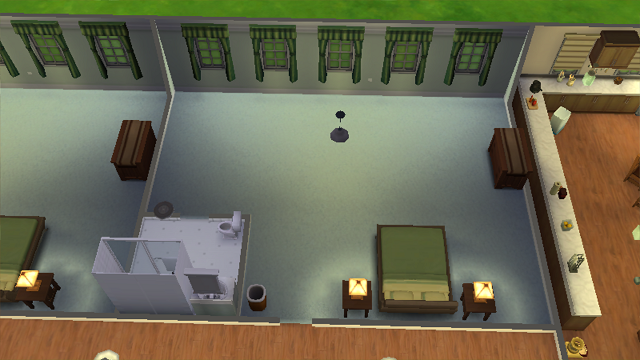 The other rooms. Same thing; same switch near the floor. They could be activated from the outside by Medicus or one of the other unicorns if need be. 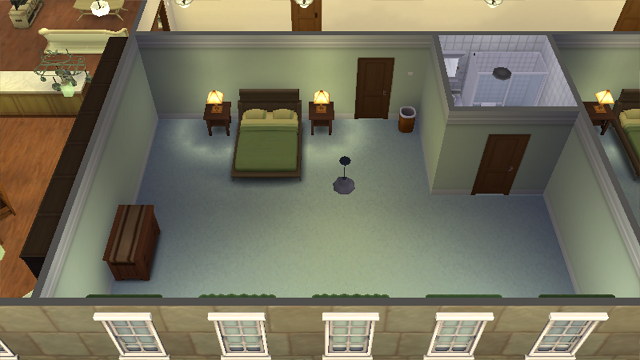 Bed side of the other rooms, walls up. 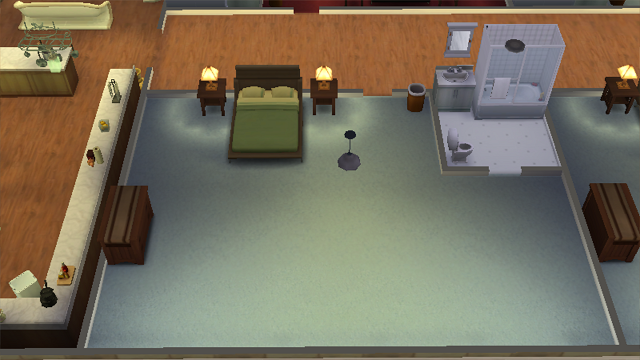 Bed side of the other rooms, walls down. I should also mention that all of the showers in this house (except the ones in the weight room) have one of those benches for anyone who doesn't feel up to standing in the shower. 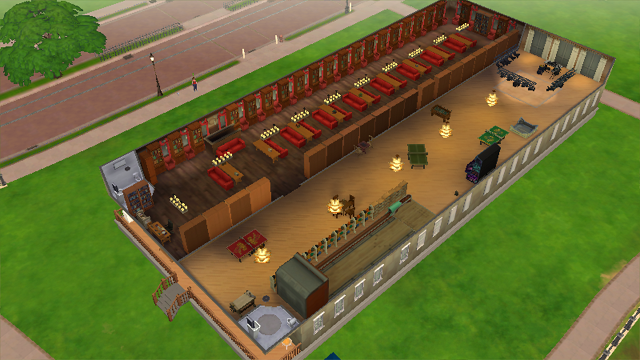 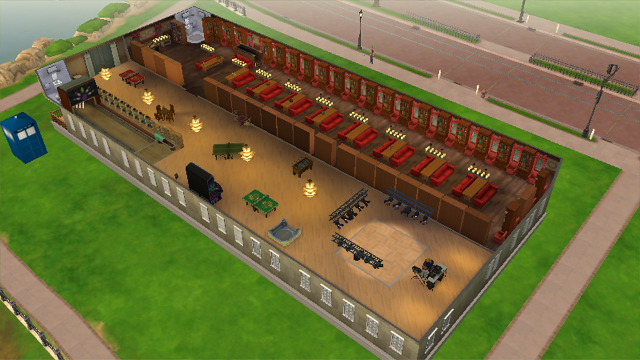 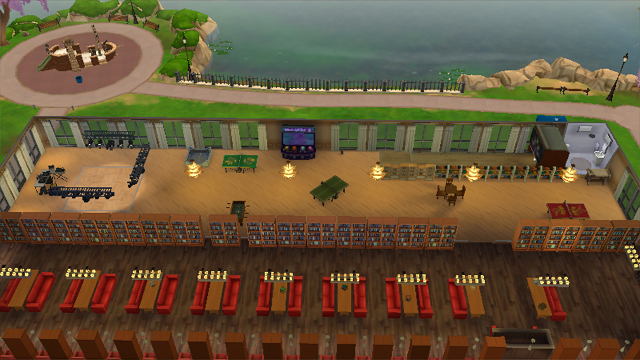 The game room. Good for parties. Whatever I put in there represents all games ever invented and whatever. Also has a bathroom. 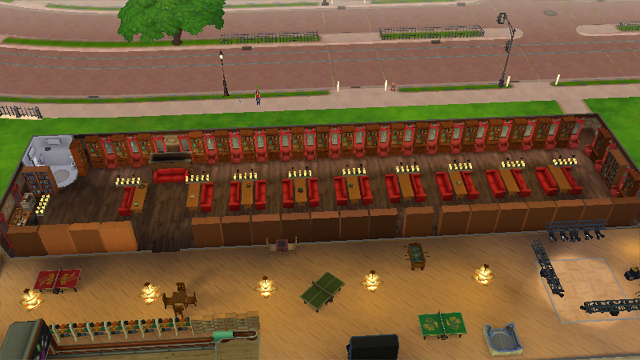 The library. It's soundproofed so you can't hear what's going on in the game room. Again, also has a bathroom. Computer because card catalog and lots of cushy sofas and chairs. 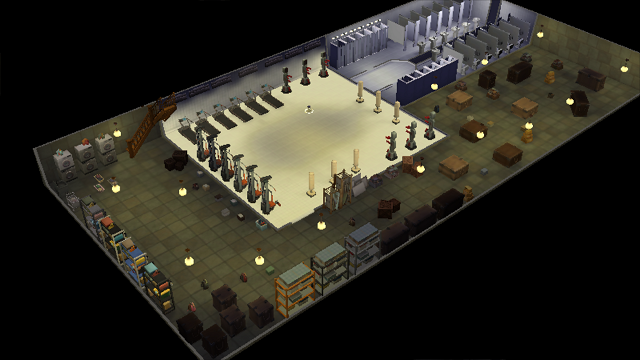 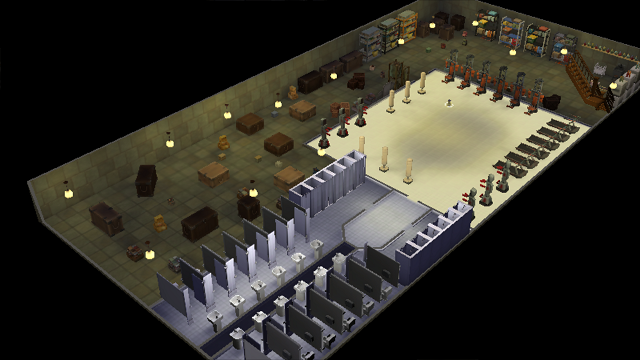 So the weight room has access to a big ol' bathroom so users can shower without having to go upstairs to their rooms to change. 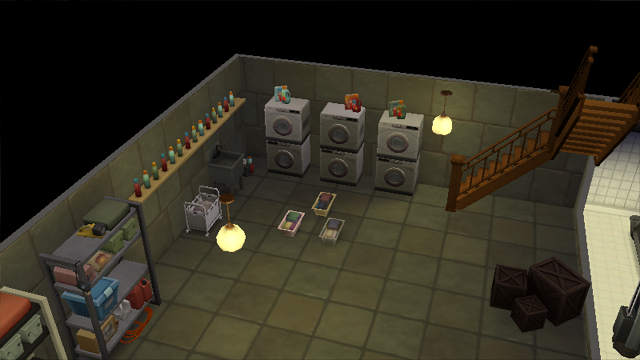 The laundry area. If needed they can rotate laundry days lol. 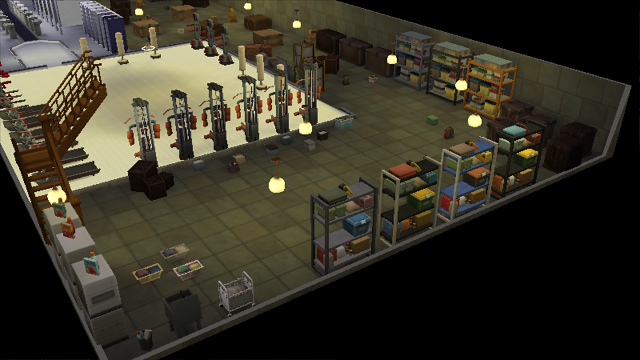 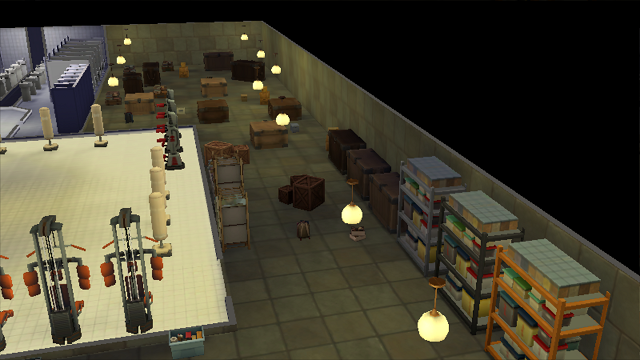 Lisa has a lot of stuff. 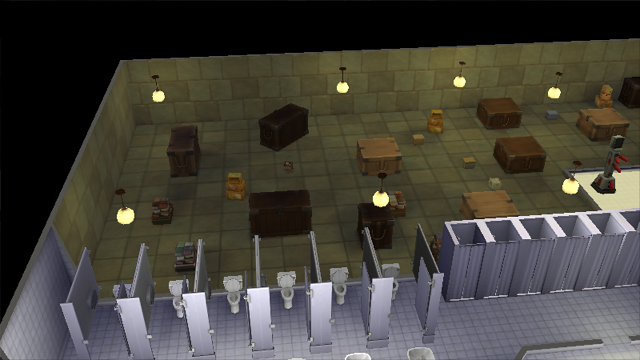 When you've been alive for, like, billions of years you tend to accumulate a lot of stuff. 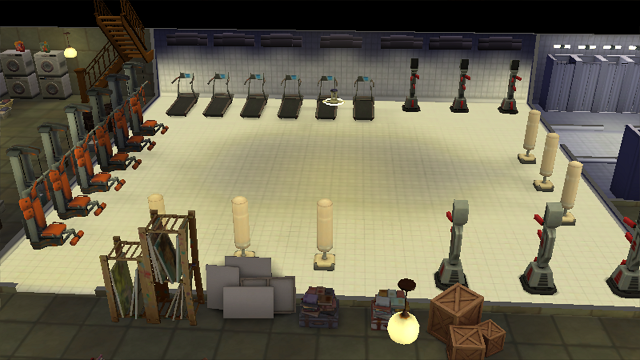 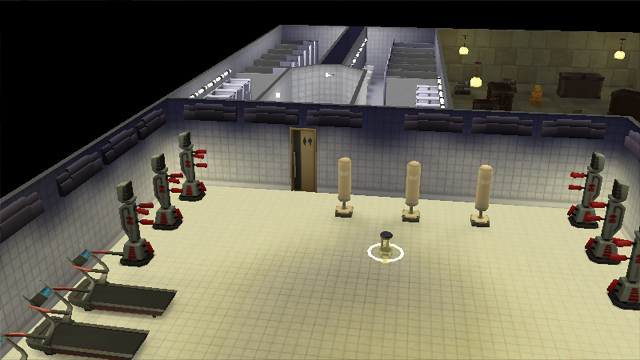 Door to the bathroom with showers. These don't have benches. 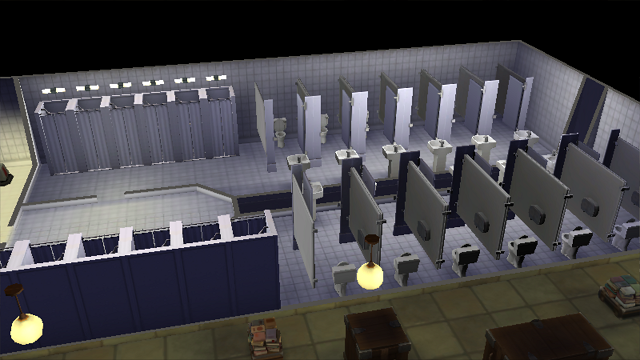 Both sides look the same, but there's showers and sinks and toilets so you don't have to go all the way upstairs for anything.